Q-Sims - The OpenSim metavers for QNAP

In both version a Q-Sims QSA (Quick Start Assistant) will guide you during the installation process up to the metavers administration management.

Once Q-Sims is installed on your server, you only have to install and run a client software (Viewer) on the remote computers to enter and navigate into the metaverses. There are several viewers:

A Metaverse is a fictional virtual world, described in Neal Stephenson`s 1992 science fiction novel Snow Crash, where humans, as avatars, interact with each other and software agents, in a three-dimensional space that uses the metaphor of the real world. The word metaverse is the combination of the prefix "meta" (meaning "beyond") and "universe". Paravers stands for para-universe and refer to the augmented reality (AR) where real world scenes are superimposed with synthetic imagery. Augmented reality can be achieved using HDUs (Head up display) placed between the viewer and the real scene but also by mixing virtual world imagery (metaverses) with real scenes.

The Sims is a strategic life-simulation computer game developed by Maxis and published by Electronic Arts. It was created by game designer Will Wright, also known for developing SimCity. It is a simulation of the daily activities of one or more virtual persons ("Sims") in a suburban household near SimCity. The Sims was first released on February 4, 2000.

Second Life (SL) is a virtual world developed by the Linden Lab that launched on June 23, 2003 and is accessible via the Internet. A free client program called the Second Life Viewer enables its users, called Residents, to interact with each other through avatars. Residents can explore, meet other residents, socialize, participate in individual and group activities, and create and trade virtual property and services with one another, or travel throughout the world, which residents refer to as the grid. Second Life caters for users aged over eighteen, while its sister site Teen Second Life is reserved to users aged between thirteen and seventeen. As of June 22nd 2009, SL has 2 millions subscribers with about 65 thousands players on-line every day.

MMOG/MMORPG Massively Multiplayer Online /Role Playing Games are video games capable of supporting thousands of players simultaneously. By necessity, they are played on the Internet, and feature at least one persistent world. MMORPG games like World of Warcraft and Dofus have more than 10M subscribers each.

Some of the definitions above are excerpts from wikipedia

This section provides information about the Q-Sims requirements. Data are still under evaluation.
The table below sums-up the QNAP NAS capabilities to help you in your Sims dimensioning.

Q-Sims runs the OpenSim simulator. To access the Q-Sims metavers, the viewer on the client side has the same requirements as any recent MMOGs (Massively Multiplayer Online Game).

In order to get a good texture rendition and movement fluidity, you shall run the viewer:

The data below are still under evaluation and the table gives a rough order of magnitude to help you to dimension your Sims (metavers).

Which implementation to choose?

In other to experiment the metaverses, you may decide to: 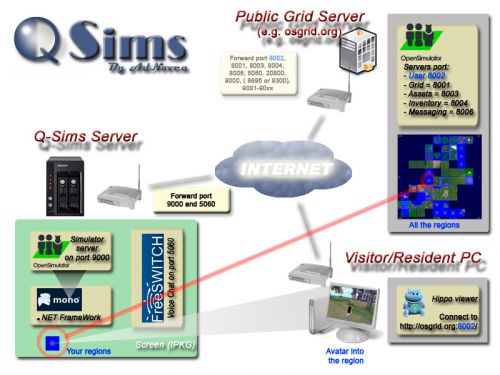 Metaverses are opened spaces and give a very high level of flexibility to residents and visitors. Unfortunately, it turns out that some visitors are ill-intentioned and can seriously damage your metavers. You better protect your work and restrict user's permissions.
read the Protect your Sims (Security) section

All these development including the OpenSim simulator are currently at ALPHA stage (to be used as sandbox or demonstrator)
Therefore, you must consider the security breaches, bugs and crashes as part of the very valuable ongoing development.


You have been warned, do not complain or blame us in the future.

You will find here valuable information about the status of OpenSim developments.

I have been asked about : The interest of metaverses regarding the SOHO servers business.
Q-Sims as "Metavers Starter Kit" helps to implement metaverses on servers to make available numerous Internet services like any Apache or Tomcat applications do it for managing websites, Asterisk does it to support VoIP or Ventrilo to enable Voice chat.

I suggest to consider the following to evaluate the interest of metaverses in the future server business.

Which future for the metaverses

Despite metaverses will be overcome for a while with games or assimilated to the 2nd life social network only, they are gaining momentum and start to interest some business applications. Some "niche" applications are already pushing some valuable developments to lead the metaverses to maturity.

There are still limitations today that prevents the wide spreading of metaverses but some are already addressed.

I would like to thanks all the people who are directly and indirectly contributing to the OpenSim simulator developments for the great work already achieved. http://opensimulator.org

If you need to chat with others users or administrators of OpenSim and/or OSGrid.org, use your IRC at:

NOTE: MySQL shall be enabled on your NAS server if you intend to use the Q-Sims FULL Edition (required by QS-Manager)